In the meantime, Nichole, Allie, and the others were making their acquaintances with Angelo, the infamous singer-entertainer of Praiano. Angelo zips up and down the steep streets of Praiano on a cream-colored scooter. 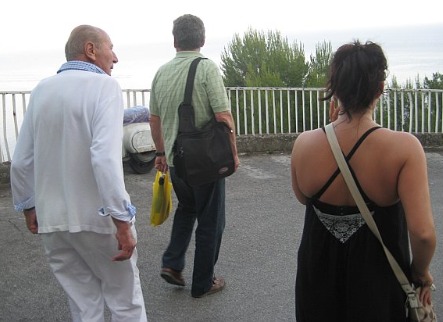 Angelo on the left in white walks with Nichole.
You can just see his scooter against the railing.

Everyone knows him. He is the owner of Tutto Per Tutti, the neighborhood grocery store.  This middle-aged Lothario was smitten with the three California girls frequenting his alimentari, and he walked them outside the store to point out his house, not far away. He told them he had heard we were all in town and had hoisted his flags in our honor.

After learning the reason for their visit to Praiano, he asked what day and time the civil wedding would take place.  He announced he would attend the event. Somehow, we did not doubt he would show up.

That night for dinner, Tony made his promised visit to Jolly Pizza. From the fridge we pulled out odds and ends that had been brought back from Angelo’s store and dinner was done.

Don't try to stop me! 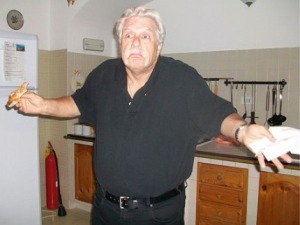 Too late! It's gone.

A relaxing evening ensued: wine drinking next to and in the pool, lounging on the terrace, and simply admiring the ever-changing horizon out towards sea.

The upper terrace offers a perfect panorama of the setting sun

As dusk settled in, the lights of Praiano bejeweled the hillside like a waterfall of diamonds.  I leaned against the railing on the upper terrace and gazed out, the soft gauzy air of night brushing my shoulders like a silk shawl. This was much better than any dream. 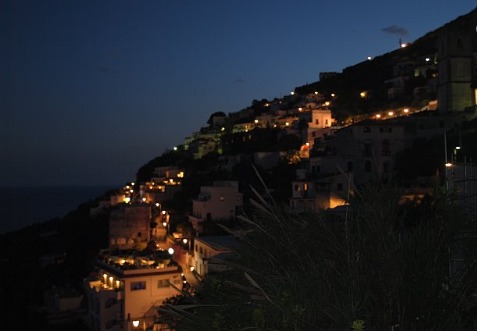 One thought on “Meet Angelo”